As well as possibly political graffiti, I have some probably religious, Arabic graffiti on Christian buildings - the cave chapel of Palea Enklistra - in Cyprus. Can anyone suggest a translation?

Hopefully Gavin will understand this better than my worryingly poor face-to-face explanation of my interest in graffiti on cultural heritage sites.

Apparently, in the 1960s, Turkish Cypriot shepherds defaced every single figure in the wall paintings of the chapel of Palea Enklistra. But I'm more intrigued by acts of disfigurement that were not vandalism - by ones that were 'devotional act[s]' (Plesch, 2005: 185).

For instance, before the iconoclastic vandalism of the paintings, some visitors to Palea Enklistra had inscribed carvings of the Star of David, ships, a fish and a camel(?), and drawings of horses with riders – perhaps of the mounted Saint George depicted in the chapel (see fig. 1). They were prayers made physical, eternal. 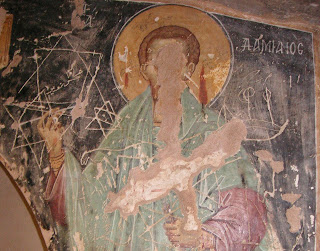 Over on Cyprus Forum, Denizaksulu has [and Emma Ruby have] identified the inscription inside the Star of David as the graffiti artist's name, Muhammed ['Muhsin'] (though the surname is unreadable). 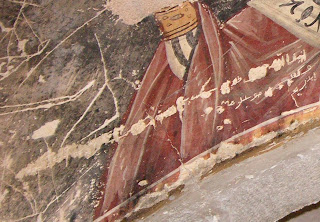 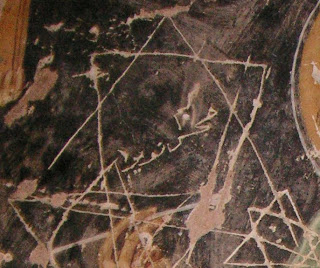 Figure 3: Arabic inscription in a Star of David in the hands of a saint (Ayios Admidios/Damiaios - Saint Adam/Damian?), Palea Enklistra
If you're still here, do you have any idea what this graffito means (see fig. 4); or even which language it is in?

It's in Limassol, and it was written on a wall of the Hellas Guest House (by one of its residents?); but unfortunately I don't know anything about these scripts. As far as I know, it could be anything from Arabic to Urdu.

Denizaksulu was also able to translate this graffiti: it's 'the word for God/Allah and then Palestine'. 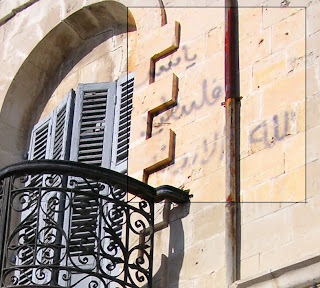 is where my documents live!

samarkeolog
Academic background and more about me.

This work by Sam Hardy / samarkeolog is licensed under a Creative Commons Attribution-Non-Commercial-Share Alike 2.0 UK: England & Wales License.
Permissions beyond the scope of this license may be available in my academic disclaimer.